What is a smart contract?

Smart contracts for blockchain are computer protocols intended to digitally facilitate, verify, or enforce the negotiation or performance of a contract. They facilitate credible transactions in a traceable and permanent manner, without the need for third parties. Smart contracts allow businesses, governments, organizations, and developers to control which contractual clauses are made partially or entirely self-executing and self-enforcing. 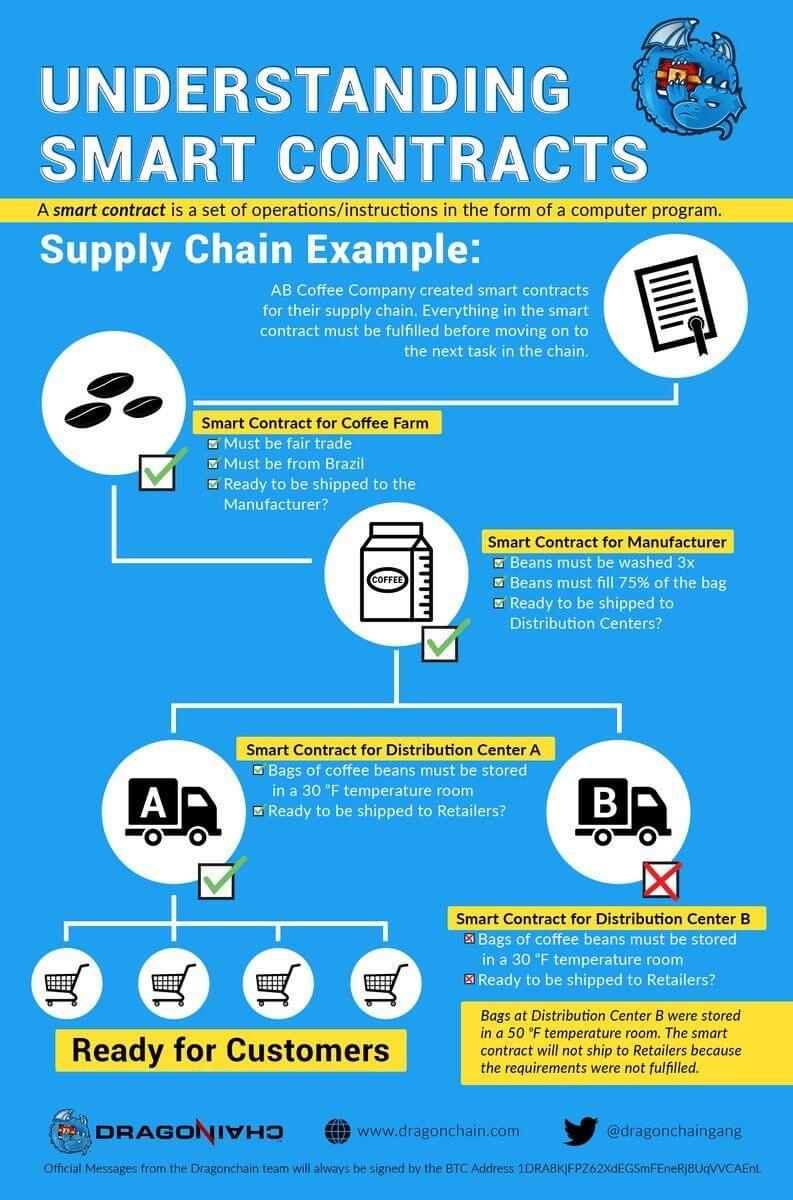 To start developing smart contracts on your own blockchain, you may find knowledge of containerization like Docker and OpenFaaS helpful. If you are not familiar with this technology, it is highly advised that you do some research on this subject. OpenFaaS (Functions as a Service) is a framework for building serverless functions with a Docker image that can be deployed on Docker swarm/Kubernetes with support for metrics. Any process can be packaged as a function, allowing consumption of a wide range of web events without repetitive boilerplate coding.

For the most up-to-date documentations on creating your Dragonchain smart contracts, visit our docs. Ready to start building your applications? Discover the features of our blockchain platform.

Smart contracts have Dragonchain architecture calls for the definition of “approval context” code to be configured or deployed on Level 1 business nodes. This approval code can be considered a smart contract. By default, this smart contract will only execute on that Level 1 node(s), under the direct control of the business owner. This provides a familiar client/server interface for smart contract creation and simplified risk evaluation. The attack vectors are more common and known to modern engineers. Turing completeness is provided within any web service platform.

The process of developing an Interchain publisher smart contract.  These contracts use your Dragonchain's built-in wallet to sign and send transactions to a public network.  Currently ETH, ETC and NEO Publisher contracts are available.

Interchain Publisher Smart Contracts use your Dragonchain's built-in wallet to sign and send transactions to the Ethereum.  When writing to an Ethereum network the transaction must be paid for in gas.

The process of developing an Interchain Watcher smart contract.  These types of contracts send a response every time something happens (such as various types of transactions) to a certain address on a given blockchain (Ethereum, Ropsten, Ethereum Classic etc.).   Currently watcher contracts are available for Ethereum and NEO.

Here we will outline an explanation of an interchain watcher smart contract on Dragonchain. Interchain Watcher Smart Contracts are used to watch certain types of transactions happen on a given address on a given blockchain.   It will send transactions from other blockchains to you.

What is a token?

A token is quite simply a quantified unit of value that can be spent, tracked and traded. These tokens can be exchanged for other currencies or tokens based on valuation. This is all accomplished via a marketplace and transactions.

Tokenized units of value can be anything within a system that has value, tangible or not. Unlike fiat currency, tokens allow us to define a broader set of values and the rules that govern how that value is spent. Unlike in a fiat model, things like social capital, natural capital, or cultural capital, can be tracked using a token system.

Tokens are digital and they can be programmed. Tokens can be programmed in such a way that it can only be used or spent under certain conditions. Conditions can be set and tracked in the code. A token could be created that could be paid in dollars but the token itself can only be used at certain parties or locations (marketplaces, health credits, educational credits, etc).

With Dragonchain, we track this value using  Distributed Ledger Technology within an L1 Dragonchain node.

A smart contract is a set of operations or instructions in the form of a computer program. They are programmatically made to only accept inputs and outputs defined in the contract. Any smart contract should promise that valid inputs lead to valid outputs.

Using the Currency smart contract, organizations can specify a total amount of currency that can be retrieved, transfer currency between wallet addresses, or check the balance of the currency in a wallet address. These can all be run using different schemas (e.g., ERC20 or ERC223).

The process of developing a smart contract that creates a currency on your Dragonchain is simple. Currency smart contracts are essential in most blockchain projects. Checking a balance and moving balances between addresses is as easy as posting transactions to your chain. Once the currency contract is created on the chain, these methods and variables can be used via the API 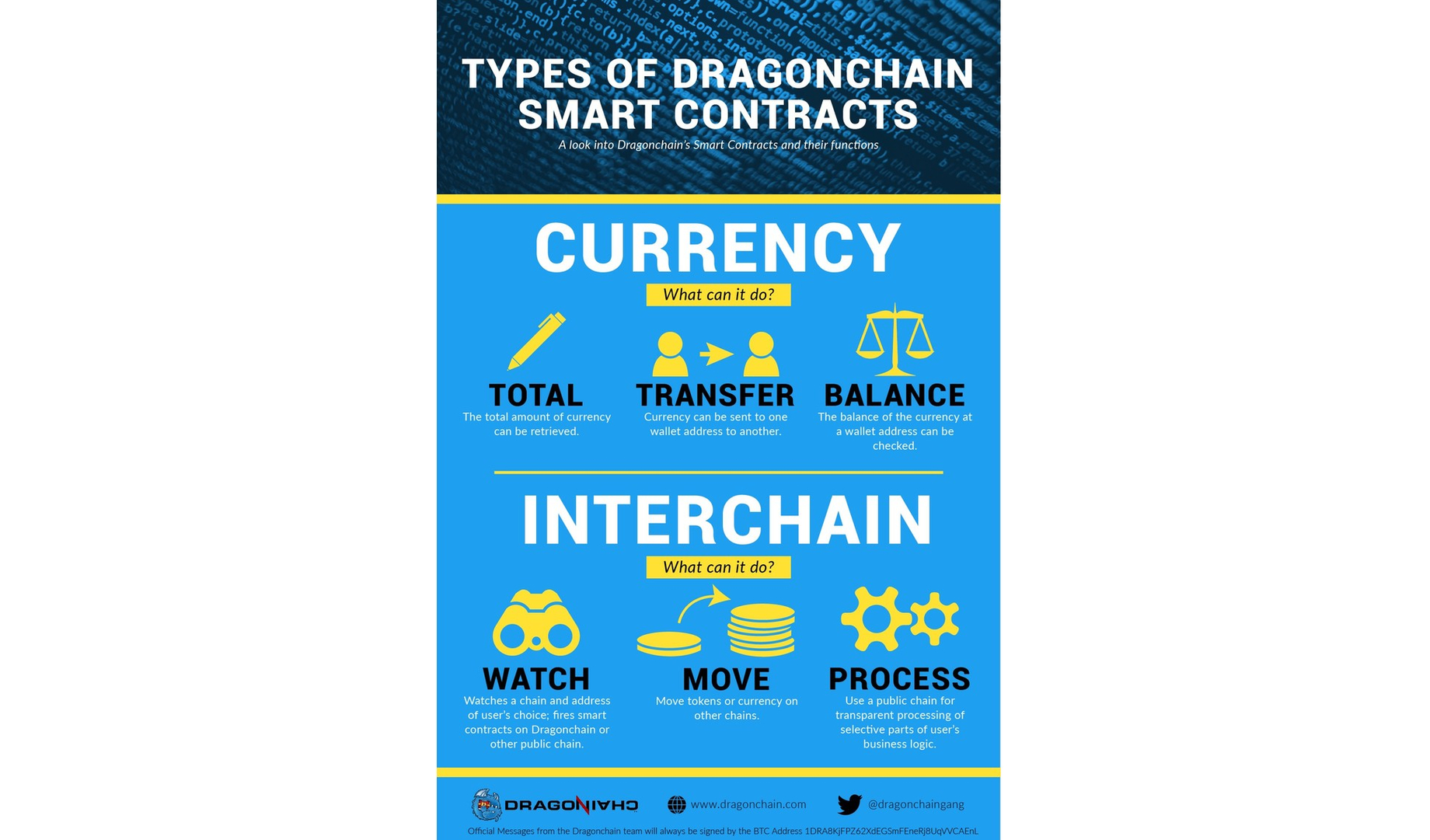 Q: Are smart contracts legal?
A: Yes and no. A legal smart contract that is capable of self-executing, with accepted terms of an agreement between two or more parties, can be legal. There is a lack of regulations and written laws.