In an investigation by BuzzFeed and the International Consortium of Investigative Journalists released Monday it was found that multiple banks’ internal compliance officers caught more than $2 trillion in suspicious transactions between 1999 and 2017. The transactions were flagged as possible money laundering or other criminal activity and are part of routinely filed reports to the U.S. Department of Treasury’s Financial Crimes Enforcement Network.

As the news rippled through the industry, the subsequent sell-off was deep for named companies such as Deutsche Bank and JP Morgan. The topic even made it to Super Happy Dragon Lucky where Joe Roets was joined by Ross Davis from Global Crypto Press Association and Bruce Wiseman AKA John Truman Wolfe the writer of the #1 Amazon Best Seller, The Coming Financial Crisis: A Look Behind the Wizard’s Curtain.

After the realization that $2 Trillion was really not that much over 18 years for such a large industry the crux of the problem remains. Joe noted, “This happens all the time. This one may not be as bad as originally thought. This one is self-reporting by the banks themselves. The more corrupt ones where they realize the suspicious activity is cartel money or some other illegal activity and they keep doing it are the most egregious. They realize they've been moving billions or trillions of dollars and they keep doing it. When it is discovered, nobody loses their job and nobody goes to prison. Sure, they pay a fine of twenty-five, fifty million dollars, but that’s all.”

Ross points out that the fines are not even equivalent to the amount of money they made doing the crime.

Joe agreed, “It ends up being a profit deal!”

It didn’t escape anyone during the show that John, the author of a book about the next financial crisis, had his connection repeatedly severed. When John was able to connect he brought up the 2012 LIBOR scandal. “It was determined that the major banks dealing with LIBOR, which is the bank lending rate in Europe, had been manipulating the rate. They made billions of dollars in profit betting on which way the rates were going to go while they were controlling the rates. In that case, the fines were in the billions and the bank wrote it off as a legal expense.”

John expanded on the ethics of these banks and other big industries. “If you look at Deutsche Bank it is probably the most unethical bank on planet Earth, at least of the international banks. JPMorgan Chase has been sued several times for manipulating the precious metals markets. It's the same in pharmaceutical companies. They come out with drugs, promote them, and make several billions of dollars. Then, a few years down the road it's determined that, oh, this thing causes brain cancer. They say “Sorry”, they get fined a few million dollars, and nobody goes to jail when in fact, their clinical trials showed that this was a problem. It ends up a line item on their expense sheet.”

The financial industry is no stranger to the mounds of regulations bestowed upon them by government agencies. Financial institutions are already paying for regulatory compliance programs. Even with a compliance program, the situation still exists where compliance officers need to discover, report, and pay fines on nefarious transactions to the tune of $30.9 million, on average. While traditional reports fit nicely on a database there is no proof component involved in the data entry. There is no way to prove the data or transaction was executed without tampering.

Know Your Customer (KYC) regulations were intended for cases just like the one reported Monday as a way to combat unethical behavior such as money laundering and fraud. Financial institutions must collect as much information as possible to adequately “know” their customer.

MyFii, an independent entity of Dragonchain that uses Factor technology, provides an environment to help institutions comply with KYC requirements without the need to hold personally identifiable information (PII).

MyFii procures the required KYC documentation and arranges KYC approval via an identity provider. The documentation goes through the approval processes with the identity provider, who then authenticates the customer’s identity. MyFii will then hold only what is minimally necessary to comply with jurisdictional guidelines. MyFii then releases the approval factor to the institution. By using MyFii, KYC is compliant and the financial institution decreases the liability that comes with storing PII. Read more about Factor here.

When combined with on chain transactions the two work in tandem to flag suspicious activity. For instance, if a deposited or withdrawn over $10,000 is made the transaction is flagged and generates a report.

The technology behind Factor is part of a suite of products that fall under Dragonchain’s Proof Systems umbrella to offer assurance that the outcomes of an event occurred with certainty and confidence through automation and independent verification. Powered by Dragonchain’s Interchain technology and protected by hash power, Proof Systems leverage multiple blockchain systems to prove that transactions occurred at some point in the past with hundreds of millions of dollars of measurable proof. The generated Proof Report can help financial institutions slash the $1.9 trillion dollars spent annually on compliance.

A Proof Report shows the transaction ID, timestamp, raw data, and the hash of Bitcoin and Ethereum. These reports can be used to prove compliance to regulatory authorities should the need arise. Proof reports can be distributed to authorized parties or consumers to enhance accountability. The report can selectively expose all or part of any transaction.

The report also shows the Transaction Security Value. The metric shows, in real-time, how many dollars ($USD) of energy consumption has been used to secure a transaction. The security value of a transaction starts with millions of dollars of proof on the first day and increases to billions of dollars within a few months. Every subsequent block securing the transaction makes tampering with any transactions economically debilitating. 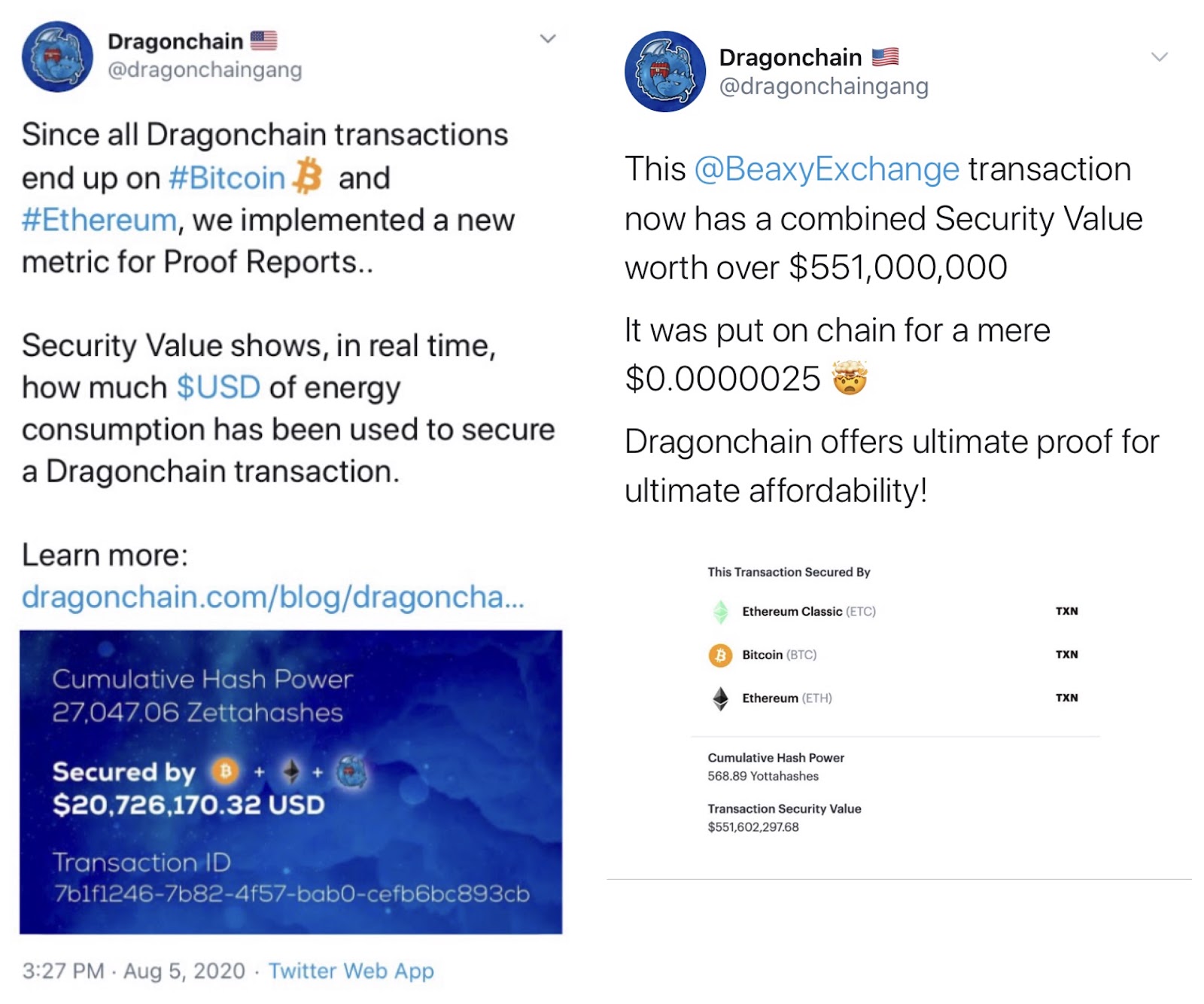 The same transaction 49 days later has a Transaction Security Value of $551,602,297.68. This amount will continue to increase infinitely. You can watch for yourself how the security value increases over time and continues to increase forever without adding costs to your business.

Some areas where Dragonchain can offer proof with a simple integration into existing traditional software and workflows already operational include,

Automated systems that use blockchain technology can make an impact on the financial industry. Institutions can protect themselves and increase revenues, legally, by instituting Proof Systems.

Dragonchain is an advocate for healthy financial markets. Learn more about Proof Systems or contact us directly.