In the past, communicating with a Dragonchain required hitting RESTful endpoints with a static API key in the authentication header to a centralized API gateway. This, in turn, would authenticate and route requests accordingly.

The new system that we’ve developed to communicate with a Dragonchain allows for more direct access to the node running the chain itself, and also allows for the Dragonchain to handle its own authentication system completely independently of any centralized service which is much better for permissioning. This will allow us to more easily manage API keys, and in the future, add fine-grain permissioning on an API key basis.

Because this move required us to reimplement parts of our authentication system, we took the opportunity to completely re-haul the way our authentication system works in order to make the system much more robust and secure. All requests to a Dragonchain must be authenticated with signed HMAC requests in the authentication header, rather than providing a static API key. Previously, with a static API key, if anyone was ever able to see/man-in-the-middle any of your HTTP requests, they could easily get your API key, which would give an attacker full access to your Dragonchain. While this model makes it easy for developers to make authenticated API calls, it is not very secure. This is why we’ve decided to switch over to signing all HTTP requests with a shared key via an HMAC, rather than providing the key directly itself.

This means that upon the creation of a Dragonchain, a shared (secret) API key is provided to both the user and the Dragonchain itself. Then, when a user wants to make any requests to the Dragonchain, they simply have to generate the HTTP request that they wish to send, then ‘sign’ that request with the the shared key via a cryptographic HMAC algorithm, and include this special signature in the authentication header.

This has a couple of important security implications which are worth noting:

With this new authentication system, we have also implemented a replay protection system. As a quick summary: a theoretical replay attack is where an attacker is able to somehow man-in-the-middle or sniff a connection between two targets (in this case a user and a Dragonchain). If they could break HTTPS and your requests that you send to a Dragonchain, they could theoretically ‘replay’ them by sending the same request to the Dragonchain. For example, imagine you created an HTTP request which transfers 100 tokens from a source to a destination address of a currency contract on a Dragonchain. You then sign this request and send it to your Dragonchain. If a hostile adversary were somehow able to intercept this request, they might be able to simply keep sending this HTTP request to the chain, causing an additional 100 tokens to be sent out of the source address every time an attacker ‘replays’ the valid signed request.

Other blockchains such as Ethereum or Bitcoin implement replay protection by requiring the user to keep track of a ‘nonce’ for each address, simply incrementing the nonce for every transaction. The problem with this is that the end user either needs to keep track of the nonce, or make a network call to receive it every time they generate a transaction. Our implementation of replay protection simply requires that the user is able to generate an ISO 8601 UTC timestamp and include it with their request, so they don’t have to keep track any extra data other than the current time. If the timestamp in the request is too far off, or the request signature has been seen recently, the Dragonchain will reject the authentication even if it was signed correctly which mitigates any sort of replay attack.

With all of these changes, we recognize that the heightened security requirements make it a bit more difficult to interact with a Dragonchain, which is why we have created and are releasing a couple open source SDKs to interact with the new Dragonchain system. Initially, we have SDKs for both Python3 and Javascript (available on npm and pypi as complete packages respectively). You can also view the source for these here:

Overall, this new Dragonchain release signifies a huge step towards greater performance, reliability, security, and scalability of the Dragonchain eco-system. We will be maintaining support for our legacy authentication system with the old static API keys for a while in order to allow transition time for anyone that needs to adopt the new authentication system. 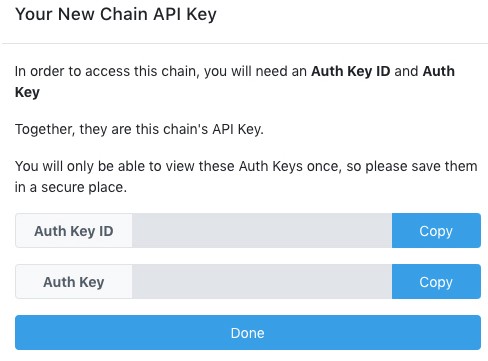 If you’re interested in learning more about Dragonchain and our blockchain-based solutions, try it out for free of visit our contact page.

If you have any questions about our new authentication system, or experience any issues while generating new API keys for your existing Dragonchain, please email support(@)dragonchain(DOT)com.